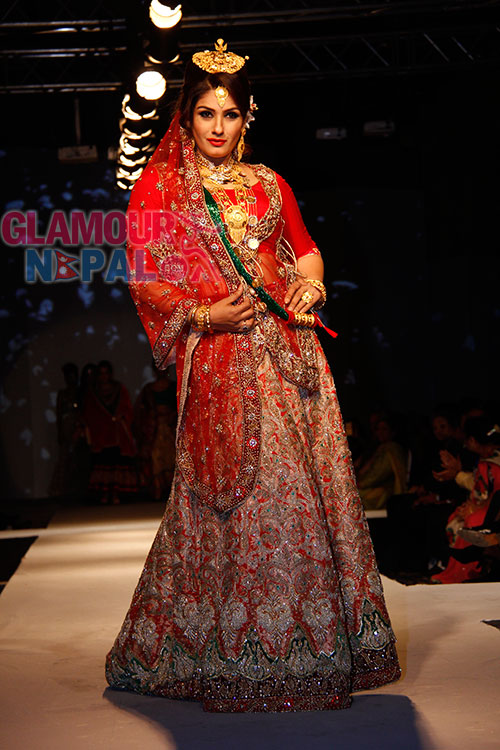 Glamour Nepal, Kathmandu
It seemed as if the eyes of the audience were glued on the moving scene seen on the runway of The Jewelry Fashion show. The charm, elegance, beauty and attraction of the various kinds and designs of golden and diamond jewelry showcased on the runway made every single audience felt spellbound. From the traditional to modern designs, every single piece of jewelry was worthy to watch.

The concept to combine and synchronize the jewelries with the attires representing different religion and ethnicity of Nepal was pleasant and delightful to watch. Besides the professional models the celebs of various fields of Nepal walking on the runway did added extra glam and life to the jewelry they wore to showcase.

Beauty queens like Ruby Rana, Malina Joshi, Ishani Shrestha, Sadikchhya Shrestha, Subekchya Khadka, Nagma Shrestha, Shavona Shrestha, Subin Limbu and actresses like Priyanka Karki, Sanchita Luitel, Reema Bishwokarma to Banker Raveena Deshraj Shrestha made their special appearance on the runway. Among them former Miss Nepal Sadichhya Shrestha looked awesome. She walked on the runway in a blue lehenga combined with a peacock shaped top which was adorned with the gold and precious stones.

Above all was the Bollywood Actress Raveena Tandon was the show stopper who walked down as the show stopper. With the confident smile on her beautiful face Raveena walked with grace and elegance. Dressed in a bridal lehenga choli, Raveena was seen with traditional styled golden jewelry. With golden flower known as Lun Swaa the typical Newar bride’s jewelry place on her head Ravina was been accessorized with a garland like neckpiece Asarfi rani haar, a sparking golden shirbindi on the forehead, chadke tilhari in green glass beads across her shoulder, golden bangles, golden finger rings and stylish ear pieces.

This special appearance of Bollywood actress Raveena Tandon was for the Grand Jewelry show, the event to mark the commencement of three day affair of Nepal Jems and Jewelry Expo 2014 took off on 7th of November 2014 and would last till 9th of November 2014 at Hotel Yak and Yeti from 10.30 am to 6.30pm. The event is been organized by Nepal Gems and Jewelry Association where three day expo will showcase Nepal’s traditional jewelry from 35 Companies.