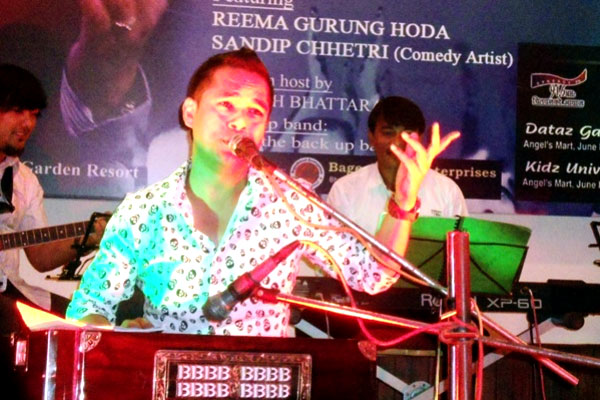 Glamour Nepal, Chitwan,
A large numbers of fans turned out to hear songs of Ram Krishna Dhakal at ‘Dhakal sumadhur sajh-2071’, organized for the first time in Chitwan district.

During the program, Dhakal not only sang his melodious modern songs, but also sang half a dozen songs of late Swor Samrat Narayan Gopal on request of audiences.

It was a nightmare for organizers to manage the function with 200 seats capacity. Few minutes after the program kicked off, a group of people who failed to receive tickets, entered the venue. The garden
resort hall in Bharatpur height was full of audience double than its capacity.

“Tickets were available only for 200 persons,” Manager of Dataj Events Dataram Ghimire said, “ the hall could not bear the capacity as it was the first solo evening performance by Ram Krishna Dhakal. According to him, some 100 persons entered the hall minutes before the program started and over 150 persons retuned as the venue was jam-packed.

Either youths our matured, single or couple all types of audiences enjoyed in evergreen songs of Ram Krishna Dhakal. Singer Reema Gurung and Dhakal’s daughter Rani also performed during the program that continued till 11 pm on Friday.

Audience captured the video on their mobiles as Dhakal’s daughter Rani performed together with her father for the song ‘Bachunjelilai’. Audiences were fascinated when Dhakal sang ‘Euta manche ko…, Himal sari yo… Sirima siri…’of Narayan Gopal.

“The voice and songs of Ram Krishna Dhakal are evergreen,” remarked Ritu Gurung of Tandi who watched the performance with all her family members, “His voice reminds return of Narayan Gopal.”

On the occasion, comedy artist Sandeep Chhetri entertained audience presenting satire. The tickets for the program were priced at Rs 1,500 for single and Rs 2,000 for couples.