Glamour Nepal, Nepali popular Musical Band Nepathya Rocked in South Korea on 7th September 2014 at the Sinheoung University Covered Hall. Nepathya Rocks 2 hours show, Amrit took the audience into an enjoyable ride reminding people of their hills, their family and the society they originate from. Images and videos of places relevant to the songs were projected on the screen as Amrit sang his folk collection ranging from Resham…, Bhedako Oon Kasto…, Talko Pani…, Lampate Surati…, SA Karnali… Not only shared tunes from the Nepali villages with the audience in Seoul, Shared beautiful images of rural Nepal with the audience too.

The audience got frenzy when peppy folk tunes like Resham… to Bhedako Oon… were played. Songs like Yo Zindagani… and Euta Chitthi… made the concert goers nostalgic. With songs like Rato ra Chandra… and Gaun Gaun bata Utha… all rose with a proud feeling of patriotism. It was a mixed affair overall.

Lead Vocalist of Nepathya Amrit said “When we were here 2010 there were around 6000 Nepalese in South Korea but now here are more than 25000 Nepalese. You are here in search of better jobs and opportunities. But as a Nepali citizen, it is still our duty to give back to our motherland Nepal. I clap all migrant workers around the world who are contributing to the national economy by sacrificing their personal, family life and youthful age. Let me clap for you.” And Amrit Gurung started to clap for the thousands of audience gathered at the Sinheoung University Covered Hall started clapping back. Many were seen wiping their tears as they clapped.

Previously Nepathya had performed in South Korea in 2005 and 2010.
Amrit Said,“I have also brought a special Chuseok gift for you.” in the middle of the show and sang a new unrecorded song for the first time.
“Ho Rama Rama… ho rama rama…
Hai Maya hansi dida
Debre gala dimple basane …..” 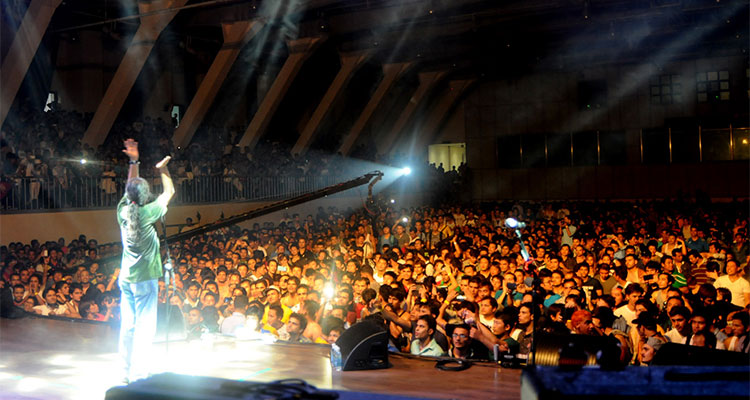 The whole audience present at the Sinheoung University Covered Hall could not hold on to their seats any more as this surprise came along. Everyone in Korea is on a holiday mood during this most important holiday here. Chuseok is also known as the Korean Thanks Giving where families reunite to thank each other for their wellbeing. In this distant land – it was Amrit and his band Nepathya who thanked the Nepalese living in South Korea for contributing to the National economy.

Jhak Thap a of the member of organizing committee said, “This was so far the largest show in terms of technical presentation and audience crowd. “We had more than 3000 people enjoying the show. This is the largest Nepali show till date in Korea.”

“It was a great pleasure to see pictures of my village. I was moved to know that the song Salaijo… was collected from my village in Nepal.” Said Puran Rana. “This is what I like the best about Amrit dai, he reaches and understands the inner core of Nepal which many of us can only imagine of.” He added.

Amrit was accompanied by Dhurba on drums, Suraj on Keyboard, Subin on Bass, Niraj on Guitar and Shanti on Madal. Coordinated by nepa~laya, The Korea event was hosted by Nepal Magar Sangh, Korea.