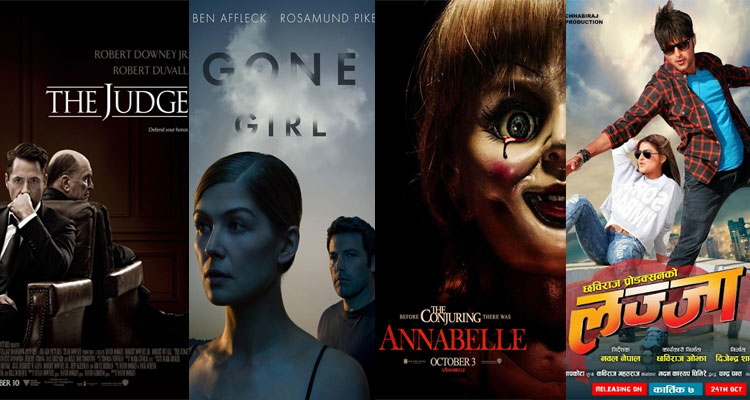 ANABELLE
Released on 3rd October 2014, it is a supernatural horror movie directed by John R. Leonetti. John gets a beautiful, rare vintage doll in a white wedding dress for his pregnant wife, Mia. Little do they know that the doll is possessed by demons. One night, Their home is attacked by a stanic cult and they terrorize the family. Anabelle, the doll is mentioned in the third act of The conjuring, and now she’s got a horrific movie of her own. it’s also known to be a prequel spin off of the conjuring. so horror lovers, get ready for a frightful nights.

THE JUDGE
Starring Robert Downey Jr., This story revolves around a big city lawyer Hank Palmer, who returns to his childhood home, where his father, the town’s judge is suspected of murder. Hank sets out of the truth and in the meantime, reconnects with his family. watch this Drama on the 10th October 2014.

GONE GIRL
When the media has its spotlight on a man’s wife disappearance, it is suspected that he may not be so innocent after all. A mystery thriller movie released on cinemas 3rd October 2014.

LAZZA
Directed by Nawal Nepal, This movie is sheduled to release on 24th October 2014. It is a love story starring Aryan Sigdel and Shilpa Pokhrel in leas roles. Mithila Sharma is a supporting role.