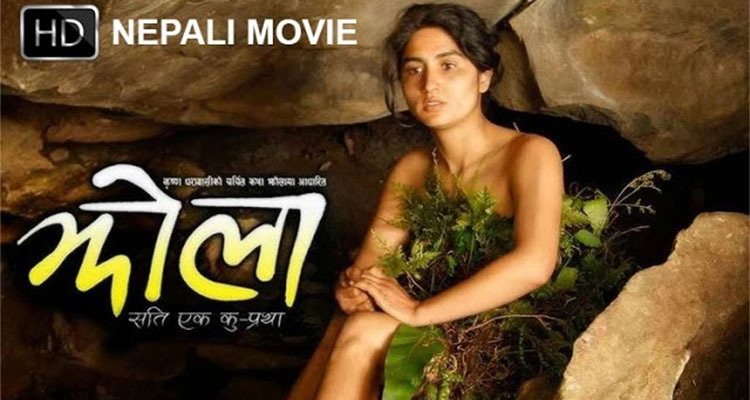 Finally, Most wanted Nepali Movie JHOLA has been revealed to watch online on You Tube. The movie is posted on You Tube by authorized you tube channel Pixel Entertainment. The movie is Directed by Yadav Kumar Bhattarai and produced by Malati Shah, Ram Gopal Thapa, Raj Timilsina and Shusil Shah. The story is penned by Krishna Dharabasi. The movie Features Garima Panta, Deshbhakta Khanal, Laxmi Giri, Sujal Nepal and Deepak Chhetri in major roles, writer Krishna Dharabasi also features in special appearance in the movie.

Jhola (झोला) is a 2014 Nepali movie based on the story by literature Krishna Dharabasi about the Sati culture that was prevalent in Nepali society until the 1920s in which a wife had to immolate herself upon her husband’s death, typically on his funeral pyre. For her role, actress Garima Panta won Best Actress award at SAARC Film Festival held in Sri Lanka, 2014. The movie was selected as the Nepali entry for the Best Foreign Language Film at the 87th Academy Awards. Watch, Nepali Movie JHOLA Making Video Here.

Story: The film begins when an old man called Ghanashyam (Sujal Nepal) leaves his bag for a night at the writer’s home. Suspicious, the writer checks the contents of the bag only to find an old manuscript which contains 11 short stories. As Dharabasi starts reading, he is transported to Nepal of the 18th century. We are introduced to a young Ghanashyam who lives with his mother Kanchhi (Garima Panta) and his ailing father (Deepak Chhetri). After her husband passes away, Kanchhi’s life becomes a nightmare. Expected to sacrifice herself on the funeral pyre, Kanchhi enters almost a daze like state and goes from being a strong-willed, loving mother to a helpless widow. As she prepares herself for the ceremony and Ghanashyam comes to terms with being orphaned, the anguish of both mother and son becomes palpable on screen. While expertly depicting the pain of the protagonists, director Yadav Kumar Bhattarai also explores the tender relationship between a mother and a son. Perhaps the best two lines in the movie are delivered by the sister-in-law who sums up the audiences’ thoughts when she says: “Why is it that only a woman has to sacrifice her life when a man dies, why can’t he do the same … And why is it acceptable for a man to marry for the second time” Although the Sati system was abolished decades ago, Jhola is still relevant to today’s Nepal where, unfortunately, cases of sexual harassment, violence against women, trafficking remain all too common.