The music video of Wari ko Dada Ma Ma…, which celebrates the childhood friendship between two adults and nostalgia. The song accompanied with the video is composed and sung by Anup Ojha and Pradeep Lama. Filmed in Nepal and Australia, the video explores the relationship between two childhood buddies who are currently living in two different time zones. The video is produced by YES Study Austraila and is presented by The NEXT, in collaboration with Sagar Raj Film. 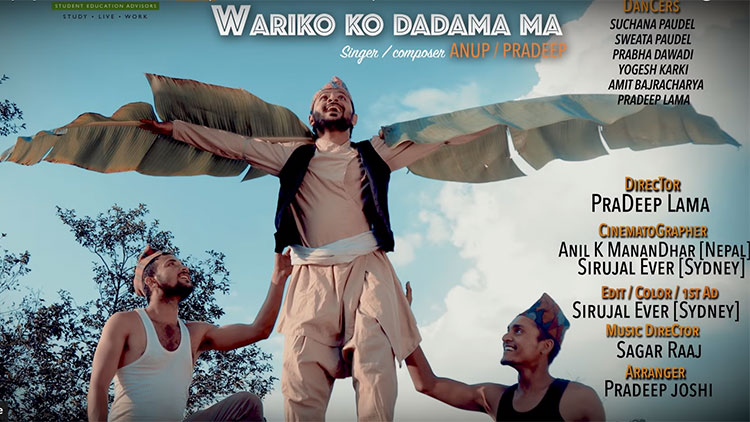 The video is directed by Pradeep Lama, choreographer and co-founder of the popular production company The NEXT, based in Australia. With millions of hits on the YouTube, The NEXT has already been a familiar name among Nepali music lovers for their creative cover dance performances and other original items. The music arrangement and mixing of the song is done by Pradeep Joshi. The screenplay is written jointly by Saagar Raj (in Nepal) and Amit Bajracharya (in Sydney).

“This is our first project that we did in Nepal as well… It took some time but we are glad that the video is finally hitting the airwaves. The video is our way of celebrating our friendship, and hope it goes on to relate to other such friendships like ours,” said Pradeep Lama, director and choreographer.

The song also marks the musical debut of Anup Ojha, a journalist with The Kathmandu Post English daily. As a journalist with the Post, Ojha has long experiences of writing music reviews, covering concerts, interviewing famed artists and celebrities from music both national and international arena. He is also a theater artist a student of Nepali theater veteran Sunil Pokharel.

Sharing his excitement over his first song, Ojha said, “I am happy to come up with my first song. It couldn’t be better than this song which celebrates a beautiful relation of friendship. I hope millions of Nepalis living abroad, far from their loved ones, can relate to this song, and feel nostalgic about their childhood and their special friends.”

The video is the seventh output from the Sydney-based Nepali production group The NEXT. Prior to this, The NEXT has produced such music videos as Mai Nache Chham Chhami, Funtastic, Mitho, Yo Ke Vayo, and to Ghin Ghin Bajo among which the rendition of Jaalma was a hit garnering over 7 million views on Youtube.