“EXHIBIT I” a brief historical recollection of item songs in Nepal 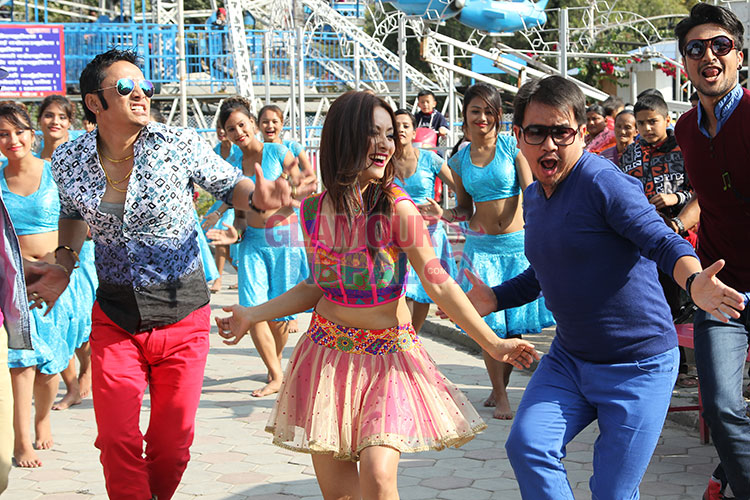 You may (generally) love it or you may hate it. You may call it ‘sexy yet classy’ or condemn it as ‘objectification of women’. Or you may find yourself humming the tunes every now and then, or just shun it completely for its nature. But you have to accept this—items numbers, with their styles influenced highly from our neighboring Indian cinema culture, have become a part of Nepali films.

This love-hate relationship with item numbers is largely for its ‘exhibitionist’ nature. Part of its criticism is drawn from extensively repeated music beats—but for the most of it, item songs are placed on crosshairs of disparagement for ‘skin show’. A quick rummaging through the pages of Nepali history stands witness to songs like ‘Chori Bho, Chori Bho’, featuring Gauri Malla from the film ‘Sathi’ almost facing nationwide ban, and a recent page of history recollects director Nischal Basnet ridiculed by a woman for she found ‘Udhreko Choli’ from ‘Loot’ film as too hot to handle. But let’s face this fact—craze, demand, hype, and popularity of item songs are increasing even as we speak.

It may seem that item songs mushroomed out from the past 5 years or so, but their existence has to be traced back to the 70s. Yes, the term ‘item’ became of part of South-Asian language not so long ago, but by nature, item songs have been present from ‘Maitighar’ (1966). The film by B.S. Thapa featured a song ‘Ma Pyar Bechidinchu’ featuring Bollywood starlet Mala Sinha. Even though it may not have been called ‘item song’ in the era back then, the nature of the song definitely matches the description of it by the book.

Linguistically, ‘item’ connotes a young girl, often frivolous in nature—usually depicted in films as a bar dancer, a gangster’s moll, a courtesan, or mostly a girl of protagonist’s fantasy. President of Nepali Film Journalist Federation Shanti Priya mentions, “Formulaically, item songs attempted to depict the carefree life of mobsters and gangsters in film. A song like that would try to bring highly glamorized version of a common’s person desire and how filthy rich people lived their lives. In this context, that aspect of glamour, the flamboyant and frolicsome environment of it all—comes from Bollywood. We are highly influenced by the cinema of South and our depiction of item songs are largely reflected from what was at our disposal”.

While the 70s era witnessed a huge collection of item songs in Bollywood, Nepali films relied heavily on duet numbers going parallel with background dancers back then. Shanti Priya elaborates, “There is a hazy history from the 80s. We wanted to become original in our dance numbers and hence Nepali folk music was incorporated in the so-called item numbers. Songs that were starkly recognized as item numbers were lesser in numbers. Item numbers got a new definition in Nepal after Sambhujeet Baskota started introducing newer, more innovative compositions”.

With item songs, the term ‘item girl’, dancers who were portrayed in these songs, also became popular. Nepal is relatively a conservative society—depiction of highly sexualized imagery couldn’t be either ‘out there’ or couldn’t be as common as everyday life. Actresses like Saranga Shrestha, Gauri Malla, Rupa Rana, Sunny Rauniyar, and others helped carry the ‘vamp’ image that justifies the definition of ‘item girl’. In the turn of century, Rekha Thapa suddenly changed the entire way glamour was viewed in the industry. She brought in the true spirit of an exhibitionist, garnering hype and denigration at the same time.

Today, item songs have become integral part of it all. Items songs are not mere publicity stunts, but also serve as cultural blocks—a way that suppressed fantasy of Nepali viewers at large aspire from Nepali films. While these songs help establish actresses’ stratum, escalating their demand quickly, they also provide a particular film the mileage it rightly deserves and also reflect how glamour has evolved culturally. Under all these circumstances, the true essence of item songs have not changed—on one side, they are always condemned as derogatory to women, and on the other, always appreciated for their exhibitionist nature.

In exhibition | Some most memorable item songs

Oye Oye Current Lagchha (Ajammari Nata, 2007)
Featuring Rekha Thapa, this song from Ajammari Nata was the talk of the town when the film released in 2008. This song merged disco and pop elements.

Udhreko Choli (Loot, 2012)
Featuring Sushma Karki, this song changed the way item numbers were initially taken as. Vehemently sexualized, the song helped push Loot to the height it is today.

Chalak Chalak (Dhuwani, 2013)
Featuring Archana Dellala, the song pushed the promotion of Dhuwani extensively. Even though the film faced an eventual box office doom, the song however is a benchmark of item numbers.

Nachana Maiya (Talakjung versus Tulke, 2014)
Featuring Menuka Pradhan, this song is claimed to be the most expensive item song ever produced in the industry.

Kya Kamal Babaal (Adhkatti, 2015)
Featuring Namrataa Shrestha, Kya Kamal Babaal is one of the most awaited item songs of 2015. This song is primarily focused on the actress herself, an experiment yet not conducted in the industry.