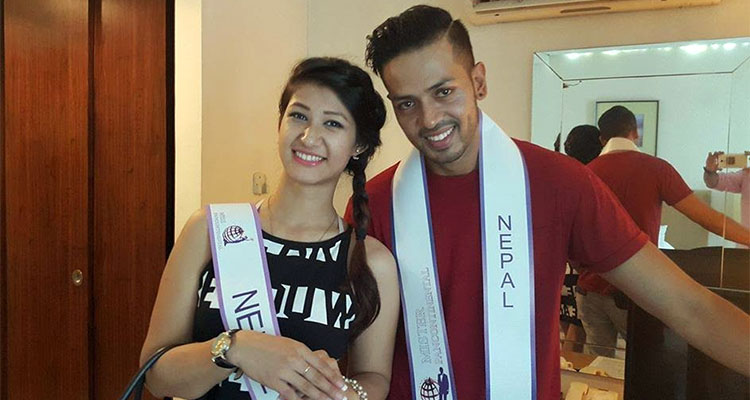 In the premier edition of Miss and Mister Pancontinental 2015 held at Manila Phillipines from 19th till 30th November 2015 the Nepalese representatives Ayushma Shrestha and Rajiv Shahi were successful to grab subtitles for each of them. 22 years of age Ayushma Shrestha was able to grab the award of Miss Friendship while 33 years of age Rajiv Shahi was successful at Mister Best Smile award. In the competition Ayushma did made to 9th position in Miss Pancontinental category.

Five feet six inches tall Ayushma is a professional runway model who have walked in various fashion shows including TGIF NEPAL FASHION WEEK, also graced the cover page of magazines like Wave and Teenz. Ayushma is the winner of Liril Fresh Face 2013 and also the second runner-ups for Miss Teen 2012 organized by Kathmandu Jaycees. On the other hand six feet tall man, Rajiv Shahi is a Director at Cargo world Pvt. Ltd. Prior to this, Rajiv was been successful as the second runner-ups and Mister Friendship for Manthunt International Nepal 2011 organized by Group of Event Entertainers, G.E.E. Both Ayushma and Rajiv’s participation at Miss Pancontinental is been arranged and coordinated by Group of Event Entertainers, G.E.E.

In the event beauty from Vietnam Hoa Thi Oanh Yen was crowned as Miss Panontinental 2015 while the host country Philippines’s representative Cassandra Ann Mc Donald got awarded as first runner-ups. Kimberly Lam from Singapore took away the second runner-ups award while Chit Snow Aung Aung from Myanmar and Radmila Isabelle Borkovic from Australia respectively won third and forth runner-ups award. Anastasiia Kaushuk from Ukraine made up to fifth runner-ups position. On the other hand Ben David Hitchcock from the host country Philippines won the title award of Mister Pancontinental 2015. Likewise Mohammad Yusuf Bin Tony was elected as first runner-ups while Anuj Ranasinghe from Srilanka took away the second runner-ups position. The competition saw Aashish Malhan from India as third runner-ups while Johnathon Stock from Australia secured the position of forth runner-ups. Avner Damit from Borneo got the fifth runner-ups award. The event also witnessed the major sub competitions on resort wear, swim wear, national costume and talent.

The Miss and Mister Pancontinental 2015 is a new pageant for both men and women will be holding its inaugural in Manila, Philippines. It is conceptualized to bring peoples of various communities and cultures from all over the world to converge, to share common values and foster international friendship and understanding. And simultaneously to search for the world’s best ambassadors to promote their respective countries in proliferation of tourism, international goodwill and cultures furthermore promote the official cause of the pageant’s diabetes awareness.

Miss and Mister Pancontinental 2015 was organized by I AM THE ONE – THE NEXT ROLE MODEL, a non-government organization working towards educating youth about diabetes awareness.