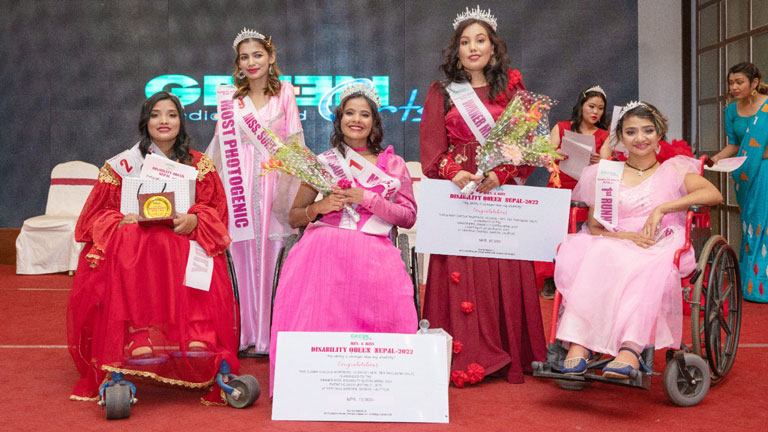 Organized under the banner of Green Arts Media Pvt. Ltd. the event was initiated last year to empower and encourage people with a physical disability, and had the tag line called My ability is stronger than my disability. The event was been choreographed by Mrs. Nepal Universe 2019 and fashion choreographer Anila Shrestha and coordinated by Pari Parinda Shrestha while Sarita Koirala played the role-play of advisor.

There were fourteen contestants who performed in the final competition being dressed in a wardrobe designed by the student designers of IIFT, school of fashion. Among the contestants, Chabbi Kumari Oli earned best hair while Menuka Ghising bagged best smile.

Likewise, Reshma Budha Magar was awarded as most talented, Nirusha Rai as most discipline, Sumaya Lama as best skin, Dhan Maya Budha Magar as most friendly, Sunita Chimouriya as most photogenic, and Samjhana Ban as most beautiful. Similarly, Jenisha Kadayat was chosen as most confident, Sanu Shrestha best personality, Amrita Rai as most glamour, Nisha Chhetri as most amazing, Anju Basnet as most humble, and Renu Moktan as most courageous.