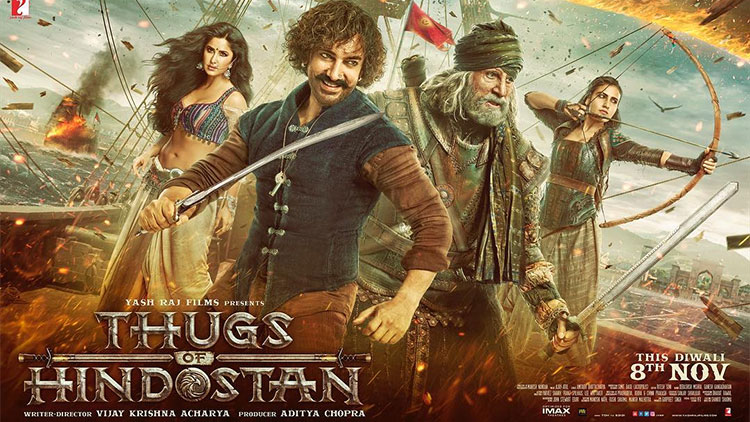 Amitabh Bachchan, Aamir Khan, Katrina Kaif and Fatima Sana Sheikh starrer ‘Thugs of Hindostan’ has broken several records on its opening day itself. Thugs of Hindostan earned Rs 52.25 crore, which is the highest collection for any Hindi film on 1st Day. Yash Raj Films project as it has become the highest opening day earner. It is the first Bollywood film to have crossed the benchmark of Rs 50 crore on its opening day itself. The record of being the highest opening day earner was previously held by Shah Rukh Khan starrer Happy New Year, also a Diwali release. It earned Rs 44.97 crore on the first day of its release.

Actor Aamir Khan expressed his happiness over the film’s performance at the box office. In a statement, he said, “Just heard the 1st-day collection of Thugs, I am humbled by the love and affection of the audience. Thank you 🙏”.

Thugs of Hindostan has also become the top day one earner of 2018. Until now, Ranbir Kapoor’s Sanju was topping the chart with its Rs 34.19 crore day one collection. Following Sanju is Salman Khan’s Race 3 with an earning of Rs 29.17 crore, Akshay Kumar’s Gold (Rs 25.25 crore) and Tiger Shroff’s Baaghi 2 (Rs 25.10 crore). Thugs of Hindostan has also given Aamir the biggest opener of his career. Interestingly, now his second best opener is also Vijay Krishna Acharya’s Dhoom 3 which opened with Rs 36.22 crore.

Much before the release of the Vijay Krishna Acharya directorial, trade pundits expected it to write new box office records on the day of its release. While predicting the day one collection of the film, Girish Johar said, “In all the languages, Tamil, Telugu and Hindi, Thugs of Hindostan will earn Rs 50 crore on the day of its release. And, if the content of the film also turns out to be decent, it will reach the Rs 100 crore mark within 2-3 days.”

However, the visual extravaganza has disappointed critics with a weak script and direction. Now, whether the negative reviews will affect the box office performance of Thugs of Hindostan or will the fandom of Aamir, Amitabh and Katrina save its sinking ship will be known in the next few days.