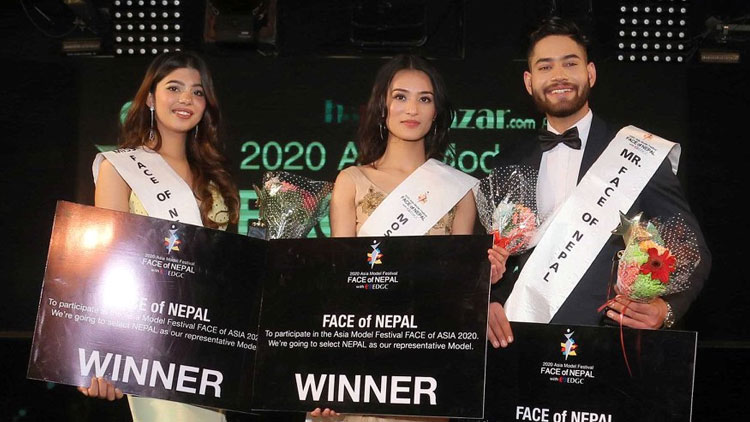 International franchised modeling competition called 2020 Asia Model Festival has finalized Face of Nepal. Showcased at Prive Nepal, Kathmandu the competition saw Bibek Khadka as Mister Face of Nepal and Smriti Nepal and Nafisha Shrestha as Miss Face of Nepal. Likewise Nafisha was also awarded as the Most Photogenic whereas Smriti also lifted the award called the most popular

23 years of age Bibek earlier was been awarded as the winner of Model Hunt Nepal 2016 and also been chosen as Mister Ocean Nepal 2017. He did represented Nepal at Mister Ocean 2017 held in Taiwan and was awarded as second runner-up for Mister Photogenic category. He also stood as one of the top 17 semi-finalists among forty nine contestants of the event. On the other hand 21 years of age Smriti has been working as a runway model and walked through various top listed fashion shows including Namuna College’s graduation fashion show, Nepal Jems and Jewelry Expo, The Mt. Everest Fashion Runway and many others.