The grand finale of Miss Nepal 2015 is scheduled for 17th April 2015. Among the 19 beautiful finalists, the most deserving lady is going to take the most coveted award of the year and would be delivering herself the responsibility, pride and opportunity of representing Nepal at 65th edition of Miss World pageant to be held on the month of October 2015.
– by Rojin Shakya

The grooming process of transforming the girls to beauty queens is almost done. The girls after finishing the prejudging session have now joined the close camp training and till the finale the girls would be in the close camp. Earlier to this during the training session the girls were seen to be the part of Bagmati Cleaning Campaign on the occasion of 100th week of the campaign. 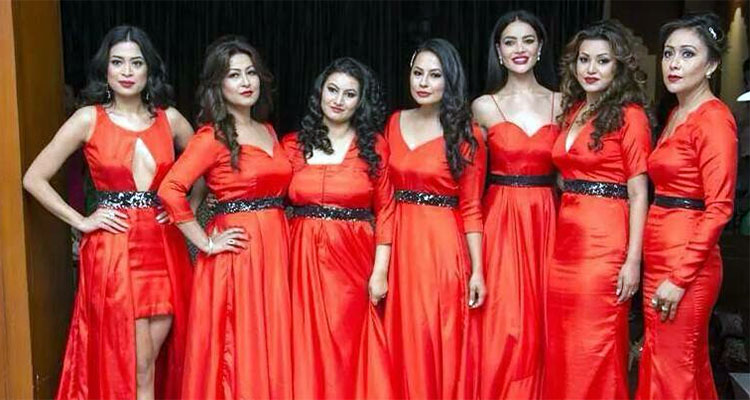 The contestants have also gone through various judging session related with the subtitle awards stored for this year’s Nepal pageant. Regarding this the contestants were seen exhibiting their talent for Berger Miss Talent 2015 held on 6th of April 2015 at Russian Culture Center, Kamalpokhari. During the talent show majority of the contestants were found on trying out their dancing skills.

Durga Gurung and Medha Koirala went out for singing and were seen preety much successful to impress as well. Other singing talents heard in the talent round were Asina Poudel and Shreya Poudel, who were found to be average on what they performed. Painting was the way to showcase the talent for two of the contestants Sudeepa Pathak and Anu Khadka while Prashamsa Parajuli put her words in the form of speech which was on Domestic violence against women.

Likewise 19 beautiful contestants were also been judged for different subtitles : Miss GOSH Girl 2015, Swasti- Miss Best Complexion 2015, The Kathmandu Post – Miss Intellectual 2015, Alfa Beta- Miss Scholar of The Year 2015 and Miss Personality 2015. The results will be out on our grand finale. Likewise, Fanta Miss Bubbly and Hyundai Miss Friendship will also be declared in the evening of grand coronation day. On the other hand SMS voting is going on for ‘Gionee Miss Popular Choice 2015’ and would end on April 17th 2015, the grand finale day.

The winner of this subtitle securing highest sms votes would be benefited with a direct placement in the top ten semi-finalists of the event. So, people vote for your favorite contestant. To vote Type MNcontestant number and send it to 3626.

The grand finale of Miss Nepal 2015 at Hotel Annapurna, Durbarmarg would kick off at 7.30 pm being live on both Nepal Television and NTV Plus. The girls would be performing as choreographed by Rachana Gurung Sharma and assisted by Former Miss Nepal Malvika Subba. The contestants would by wearing Odhani by Khusboo Dongol and Uttam’s Creation by Uttam Banepali.

Well, we wish all the best to all 19 contestants of Miss Nepal 2015 and a prosperous new year 2072 and would be back with the coverage of grand finale of Fanta the Hidden Treasure Miss Nepal 2015.