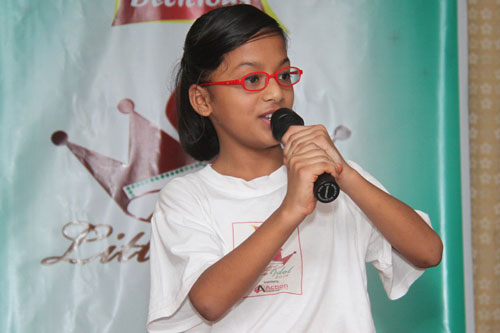 Glamour Nepal | 1st and 2nd August would be two day affair of competition when the contestants of first ever Miss Teen idol and sixth edition of Miss little idol competition will be putting on their efforts to prove themselves as the best among the others. Action Entertainment is the organizer of both of these events. Among various awards of the event, one of the major awards is talent awards and for this the contestants of both the contest showcased their talent in one occasion called to be as the talent round. The talent round was showcased at United world trade center, Tripureshwor where the contestants exhibited the best of what they know. The talent show witnessed various talents of the participating young girls and teenagers that included singing and dancing talent in the majority while there were also the contestants who performed on comic act, speech delivery, anchoring and playing musical instruments.

Miss Teen idol 2014 is comprised of 23 teen girls competing and the finale of the event is scheduled for 1st August 2014 while Miss little idol 2014 is comprised of 51 school going girls representing 22 various schools within the valley. This finale of this event is been scheduled for 2nd August 2014. Both events will be showcased at Nepal Academy Hall, Kamaladi and choreographer Rojin Shakya is been looking after the grooming session of both the events.