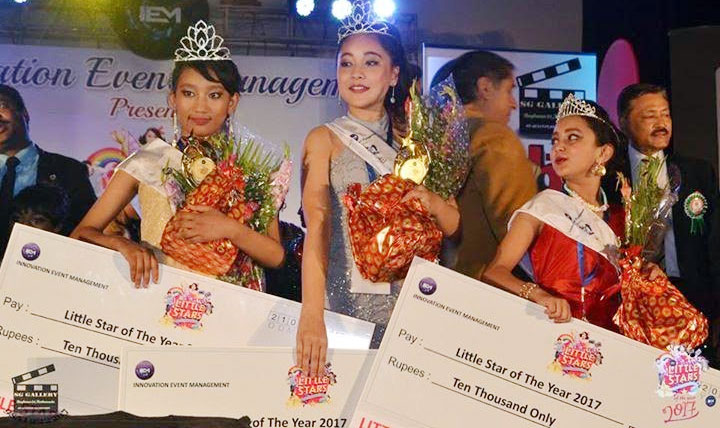 In an event targeted to the school going students named as Little Stars of the year 2017; Sandra Budhathoki, Sampada Chhantyal and Remiksha Regmi are been crowned as the winners in their respective age category.

Sandra was the winner in the C category having participants from twelve to fourteen years of age. In this category Asbiya Giri and Lisa Dangol were respectively finalized as first and second runner-ups while Sandhya Aacharya and Isha Sharma respectively held the position of third and forth runner-ups.

Sampada was chosen as the winner in B category having participants from nine to eleven years of age. This category saw Sampurna Regmi as first runner-up while Srijit Shrestha became second runner-up.

Likewise Priya Pokhrel and Sakina Maharjan were been elected as third and forth runner-ups respectively. Remiksha was finalized as the winner in A category having participants from seven to nine years of age.

In this category Rudraksha Jha became first runner-up and Atharb JB Pandey was sorted as second runner-up. Similarly Sayash MS Basnet and Aarya Thapa were positioned as third and forth runners-up respectively.

The event showcased at Army Officers club, Sundhara, Kathmandu had seventy two participants and was been organized by Innovation Event Management. The event was been choreographed by mode and actor Dikpal Karki while event was managed by Showbiz Media group.