Twenty four girls were found competing for Nepal’s Miss SLC of the year 2015 while 12 boys were seen in the race of Mr. SLC 2015. The chase for the respective category began with the self introduction round followed by oral question answer and ended with selecting the winners in the respective category after being decided by the final question faced by the finalists. 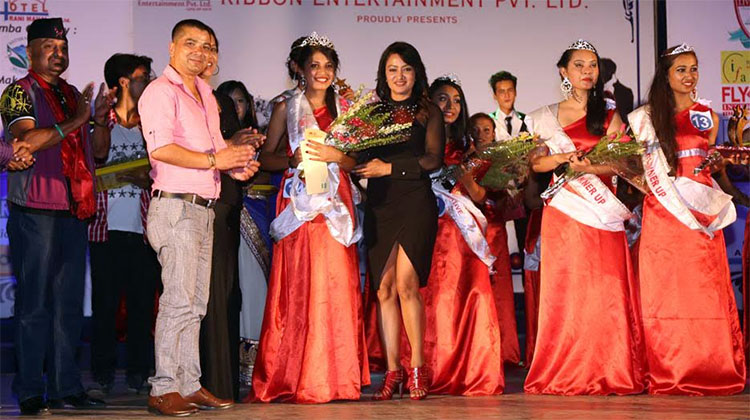 After the competitive journey Sagun Aryal became the winner of Nepal’s Miss SLC of the year 2015 while Ozaswee Dhakal became the first runner-ups and Pratikhsya Khanal was chosen as second runner-ups. Likewise Priyasha Hamal Thakuri and Prashamsa Dahal were declared as third and forth runner-ups respectively. Besides being winner Sagun topped at Most Popular and Miss Talent awards while Ozaswee, Prashmsha, Pratikchya and Priyasha besides being in the top five respectively got the awards of Best Pesonality, Most Active,Most Creative and Miss Fashion Icon.

In the event organized by Ribbon Entertainment Pvt. Ltd and choreographed by Aswini Jha, Adhiraj Malla was declared as Mr. SLC 2015. Along with the major title Adhiraj also grabbed the awards of Best Physique and Face book choice. With the awards of Best fitness and best speech Dipendra Karki took away the first runner-ups position while Rohit Khadgi was chosen as second runner-ups. Khadgi also bagged photogenic awards. Both the pageants Nepal’s Miss SLC of the year and Mr. SLC 2015 shared the same stage of Rastriya Naachghar Jamal on 17th of Asar 2072.