# Resham Filili revealed Posters and T-Shirts
# Profits of the event would be shared to support deprived children for education.
# Scheduled to hit the screens all over Nepal on 24th of April, 2015.

V Motion pictures and Princess Movies jointly organized a press meet program in capital to revealed posters and trailers, along with the cast and crew of the film RESHAM FILILI, which is scheduled to hit the screens all over Nepal on 24th of April, 2015. 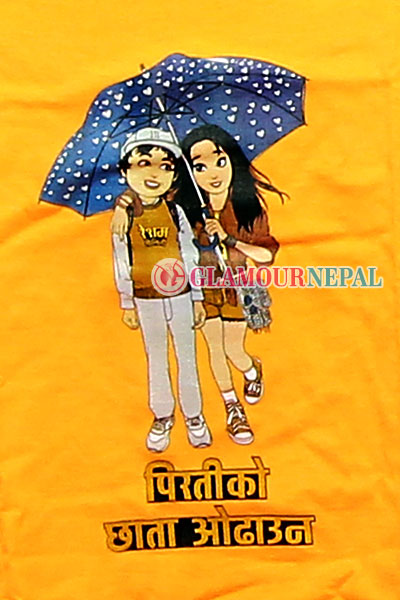 Rose Foundation, a social non-profit organization has teamed up with the producers to organize a premiere of the film also announced that the profits of the event would be shared to support children deprived of proper education.

Resham Filili follows the friendship, Dreams, Hopes and deeds of Resham and Hariya, Both weathered by bad luck and misfortunes, must at any cost beat the oddest odds to save their lives from the villain who has been making their lives miserable. Resham and Hariya met each other by fluke and since then they have been partners in bad lucks, mishaps and misadventures. Resham is average village boy while Hariya is a flamboyant dreamer, an aspiring superstar! Things get quite out of hand when they accidently end up becoming enemies with the most dreadful villain Dorje Don, whom they must either convince they are innocent.

“Jaalma” the song that rocked everywhere is one of the prime highlights of the film.

Watch The Trailer of the most awaited movie RESHAM FILILI