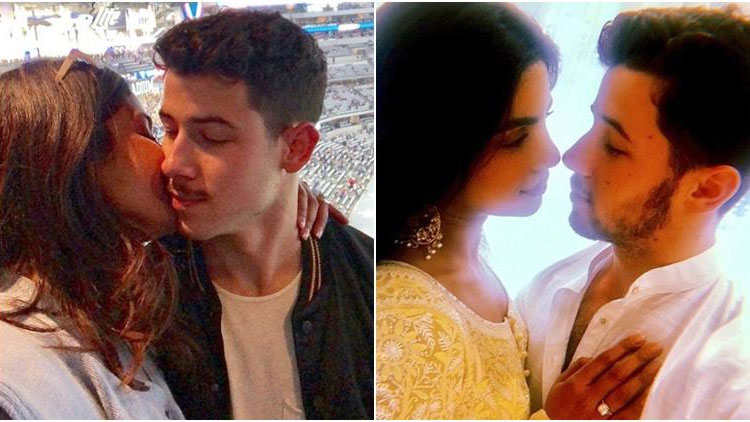 Priyanka Chopra has wished her fiance Nick Jonas with a lovely Instagram post. The two got engaged in August and have been making regular public appearances ever since.

Priyanka Chopra posted a lovely photo of herself with fiancé Nick Jonas on the latter’s birthday on Monday, and fans couldn’t help but go gaga over it. PeeCee took to Instagram and posted a photo of herself giving Nick a peck on his cheeks. She wrote, “Happy birthday baby. 💋❤️” The “Right Now” singer turned 26.

This comes a day after the Quantico star shared several photos kicking off the birthday celebrations of Nick. The much-in-love couple was surrounded by friends and Jonas family including his brother Joe Jonas.

Nick also shared a video clip of his two nieces singing the birthday song for him. He wrote in the Instagram post, “This is the sweetest thing ever. Video courtesy of my fellow Virgo sister in law @daniellejonas my beautiful nieces singing me happy birthday. 🎁🎂🎈”

This is the sweetest thing ever. Video courtesy of my fellow Virgo sister in law @daniellejonas my beautiful nieces singing me happy birthday. 🎁🎂🎈

Back home, Priyanka’s sister and actor Parineeti Chopra also wished her soon-to-be brother-in-law Nick over Instagram. In what looks like a photo from their recent Goa trip, Parineeti is flanked by Nick and Priyanka. She captioned the photo as, “Happppy bday Nick! @nickjonas This year love and lady luck is sorted, so now I can only wish you all the happiness in the world! 😜 Throwback to the first family picture we all ever took 🌴🌈 ”

Happppy bday Nick! @nickjonas This year love and lady luck is sorted, so now I can only wish you all the happiness in the world! 😜 Throwback to the first family picture we all ever took 🌴🌈 @priyankachopra @tam2cul @siddharthchopra89

Priyanka and Nick have been turning heads ever since their roka ceremony in August. The couple recently were seen getting cozy while catching a match at the US Open. Their photos from the stadium were too cute to miss. Soon, they also made a starry appearance at the Ralph Lauren 50th Anniversary show during the New York Fashion Week. Arriving hand-in-hand, they were a sight to behold. They were also spotted in Mexico a while ago where they had gone for a mini vacation.

As per reports, Priyanka and Nick are set to tie the knot in October, though an official confirmation on the same is still awaited. On the work front, Priyanka is busy with Shonali Bose’s The Sky is Pink alongside Farhan Akhtar.