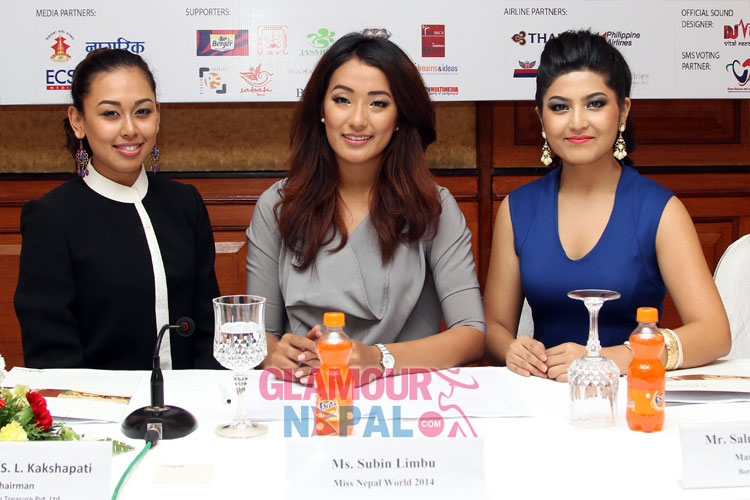 In the press meet held in Kathmandu, Miss Nepal 2014 Subin shared that she is to play Nepali traditional folk instrument ‘Jhyamta’. She explained that in order to promote Nepal’s Cultural essence international arena she has chosen this particular instrument. Subin told that in order to compete for the award called ‘beauty with a purpose’ she would make a weeklong stay at Bajhang, Dailekh and Sivakot and bring awareness related to modern and technical method of learning using laptop and animation which would be more beneficial than traditional method of learning. She said that this would focus on the primary level students of that area.

Watch the photo gallery of the event. click on small images to view large. all images by Maheswor Man Singh / Glamour Nepal

On the other part of press meet, Miss Nepal Earth 2014, Prinsha Shrestha told that she would try her level best to promote Nepal at her level best through participation at Miss Earth 2014. She shared that in order to promote eco tourism she had travelled through lukla, Namche and Sagarmatha base camp and made a documentary on Potato farming based on the conversation of local farmers.

During Press meet, Miss Nepal International 2014, Sony Rajbhandari promised that she would try her level best to the another reason for Nepalese to feel proud. She said that she desired to prove a Nepali woman can compete with the world and be the best as any girl from any corner of the world can be if been provided with an opportunity.

The press meet was been organized by The Hidden Treasure to extend best wishes for their participation at the international pageant.