Glamour Nepal, Kathmandu -The day three of TGIF Nepal Fashion Week 2014 was a star studded evening. The stars were seen shining on the stage and among the audience. Here, the stars mean the celebs. The third day saw Actor/Directors Nischal Basnet and Arpan Thapa, actor Saugat Malla, actresses Harshika Shrestha, Nisha Adhikari and Priyanka Karki on stage. To add more to this list beauty queens like Nagma Shrestha, Suvekchhya Khadka, Sahana Bajracharya, Zenisha Moktan were also spotted during the event. Among them Arpan, Saugat, Harshika and Nisha were there to promote their forth coming movie named Mukhauta. With background music being Mukhauta itself the leading pairs of the movie walked on the ramp to promote their movie. 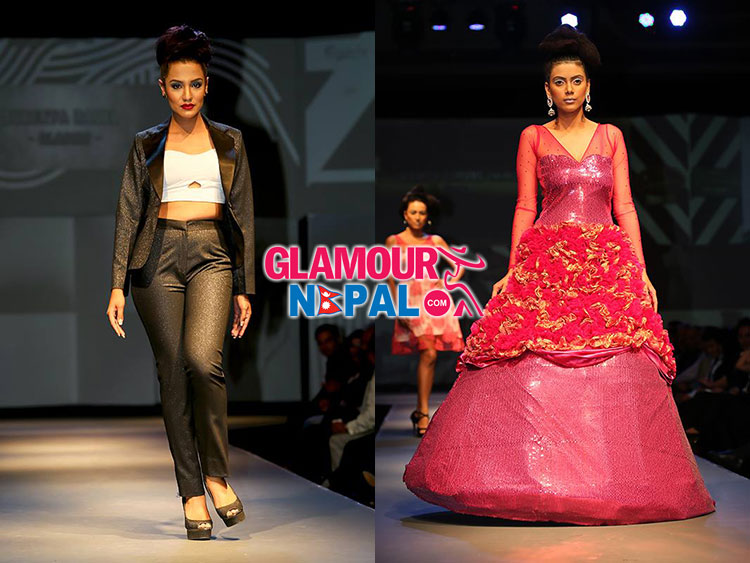 The day started with the collection by Mamta Gurung Joshi. The collection had dresses that were classy, playful, energetic, and joyful. This spring collection featured A-line, Straight, mermaid and full circular dresses. The highlighted dresses were in full circular form like a Victorian ball gown and as per that the selected models wearing these dresses came through the audience and later after performing on the ramp, they disappeared through the audience. This exclusive party and evening wear presented on the fabrics like satin, net, sheer, printed net etc gave a good start for the third of Nepal Fashion week. International model and actress Alize Biannic from France performed as the show stopper for this round.
Second came the collection called red revolution, out and out red dresses. Inspired by love, designer Sama Banu found expressing her creativity in A-line and flared dresses for evening and party wear. Though the red was the major color, this collection had golden and black as complementing color to combine. Model Niti Shah played role of show stopper for this collection.

Designer duo Anchu Pandey and Princika Baniya came up with the collection inspired by culture, tradition and fabrics of Nepal. The classic and contemporary styles that featured semi formal and casual wear range had dresses presented on the fabrics like cotton, silk, satin, khade and georgette. Knee length dresses to quarter pant, high waist hot pant, one shoulder dress to sleeves designs and skirts were the part of this collection. Indian model Erica performed as the show stopper for this sequence. 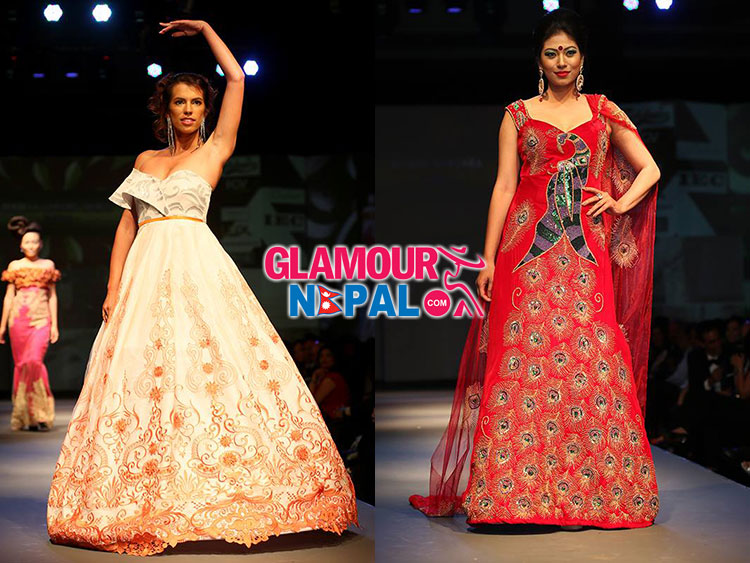 Bridal collection by Manju Banjara Dhakal became the show stealer for this day. Her brides looked beautiful, elegant and classy wearing almost the red. Besides red, royal blue, pink and beige added the glam factor. The brides found wearing heavily embellished sari along with blouse with lots of detailing, Lehangas and anarkalis. Mermaid, A-line and umbrella silhouettes brought more life to this collection. Actor-director Nischal Basnet became the bridegroom taking the runway while miss Nepal earth 2012 Nagma Shrestha became the bride wearing a special bridal attire with peacock inspired work done in golden on the red background. Chiffon, net and velvet were the major fabrics that gave life to the bridal range.
Designers from IEC College of art & fashion, Priti shrestha, Ashmita Neupane, Pratichhaya Bakhati came up with the theme called Parachute, featuring the casual mood presented on silhouettes like barrel, bottle and hour glass. The collection had weaving technique been used as the major part explored on the fabrics like Chiffon, plain and printed net, crepe, georgette. Designer Rasna Shrestha explored on theme fusion, east meets west which had western wear collection featuring the dresses with simplicity and elegance in wearable design. The use of metallic finish fabric in the colors like black, white, silver, golden, brown were seen on the runway in semi formal and casual mood. Indian model Erica made her show stopper appearance for this sequence.

Next came Rebellion by Kristina Gurung, Srijana Gurung, Sukriccina Yenden and Jyoti Maharjan. The fashion lovers got encountered with the punk look of seventies. Knee high dresses in single piece or two pieces walked through the runway. Models, hair and make-up tried the level best to complement the punk mood as been set by the designers. The leather fabric became dominant factor in this presentation. 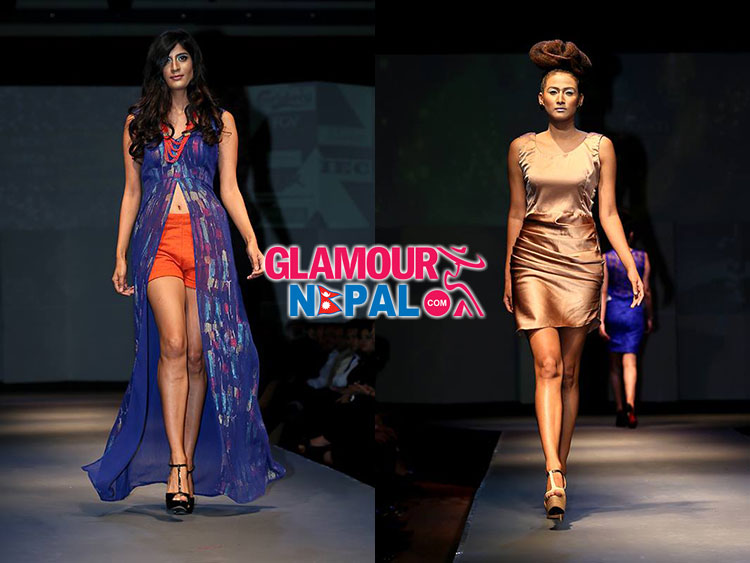 Bad romance played by Tshering Dolker Lama, Anu Gurung, Akoorida Rayamajhi and Puspa Rai tried their level best to bring the broken heart feeling lively through their designs. Black and golden were the major colors been used while casual line of dresses walked through the runway. Miniskirts, tube dresses and frock dresses were the highlights in this collection.

Up town Girl made the runway appearance by the end of third day fashion affair. One of the popular name, Subekchhya Bhadel was one who came up through this collection. Twenty numbers of dresses were the member of this collection. The earlier ten being the evening wear while later ten being the day wear formal collection. The earlier ten were classic feminine while later ten were the examples of power dressing. Red, blue and black were the major colors while cotton, lycra and chintz silk became designer’s favourite to express herself. Actress Priyanka Karki wrapped up this collection with her show stopper appearance.

Till now besides the dresses and designs, hair styling by Rajesh Ghimire is been eye treat while make-up by Sneha Rana is been complimenting the mood. The background music scoring is been refreshing and playful while choreography by Prashant Tamrakar has made every sequence interesting and mood creating. The finale is now been remained in TGIF the Himalayan Times Nepal fashion week 2014 in collaboration with IEC designing center.
Text by Rojin Shakya | All Images Courtesy: Mahesh Pradhan
Click on Small Images to View Large Images ! 🙂