Glamour Nepal, Kathmandu – lights, sound, music, choreography, models, hair styling, make-up, designer and their dresses all came in action, in bigger, better and very special way with the first day of Nepal Fashion Week 2014. It was the evening of 23rd of April 2014, venue being Regal Ballroom of Hyaat Regency hotel, when model Oshima Banu made her appearance on the runway that marked the official beginning of this year’s Nepal Fashion week event. The first day featured some eighty dresses presented in eight different sequences each comprising of 10 dresses. 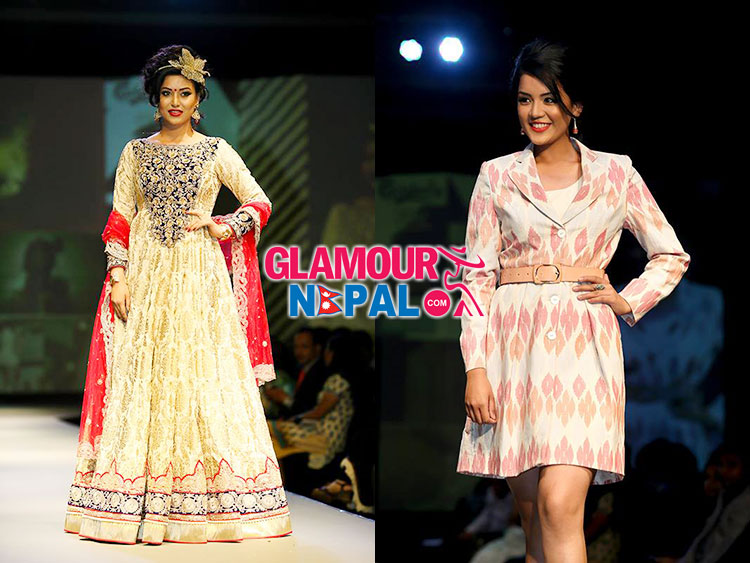 The day began with Magic of mirror work by Khusboo Dongol from Odhani boutique. This collection was all based on the mirror work supported by the hand work which added lots of shimmer on the dresses. The collection covered the lehengas having the Rajasthani touch with colors like red, bright orange, shimmer gold, royal blue being the major ones. The collection was all bridal and wedding party range explored on the fabrics like georgette, cotton, phulkari, silk and shimmer. The sequence got wrapped with former Miss Nepal 2011 Malina Joshi being the show stopper.

The second sequence came up with underwater collection by designer duo Ira Karmacharya and Anu Shrestha which featured the resort wear having the collection with use of colors like vibrant blues to Lagoon green, Pearl pink to Apricot Blush and a whole palette from the underwater. The collection featured dresses ranging from sexy short dresses followed by long dresses, Body Flattering Kaftan, classic Jump Suit to easy to wear tops with flowy Trousers. The use of traditional hand painting techniques to create sensuous look on the pure silk fabrics was the highlight of the collection. Pleats, piping, gather, tuck, sequins and beads embroidery were seen incorporated in the collection to make it look more rich and appealing. This sequence brought Miss Nepal Earth Rojisha Shahi as its show stopper. 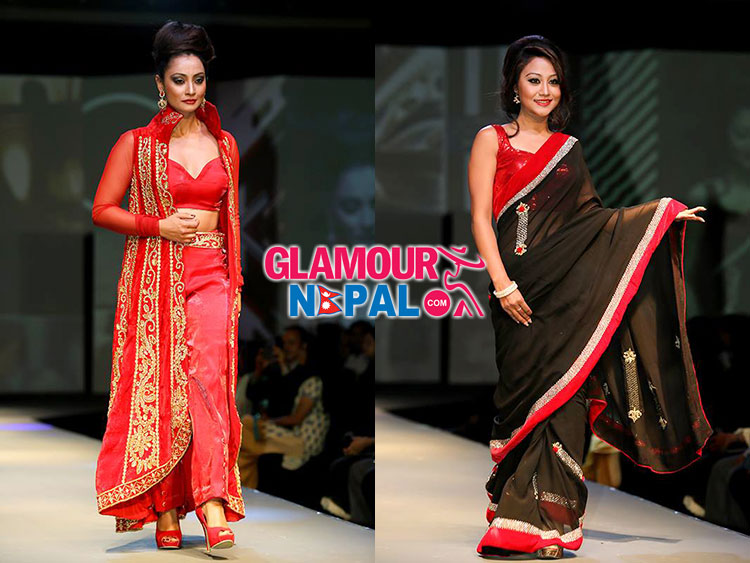 The third round was inspired from colors, the colors mobile phones named as waves of color having the dresses mostly on curve and straight line with mermaid, volume and A-line being the major silhouettes for the collection. The students of IEC college of art and fashion, the designer duo Rajani Mali and Richa Bajracharya brought this collection on various fabrics like chiffon, raw silk, net, cochin, velvet, brocade.

The forth round was Blue siren, inspired by underwater life and environment. With gradient of blue being the major shade of the collection creators of this collection the students of IEC college of art and fashion, Rashmi Tandukar, Ramita Maharjan, Jony Shrestha, Sajan Maharjan were found exploring their imagination on the fabrics like chiffon, velvet and tissue with mermaid and fishtail being the major silhouettes.

Trendy, identity, personality, attitude and style was the basic theme line for the collection of Designer Prem Deo. The fifth round of the first of Nepal Fashion week saw saree, lehanag, suit pant, one piece, gowns and long anarkali in one collection that ranged from bridal to formal and party to casual played on various fabrics like chiffon, cotton, net, jeans, silk, velvet etc with black, red, blue, pink, white, golden being the major colors. This collection was been wrapped up bike actress Aashisma Nakarmi being the show stopper. 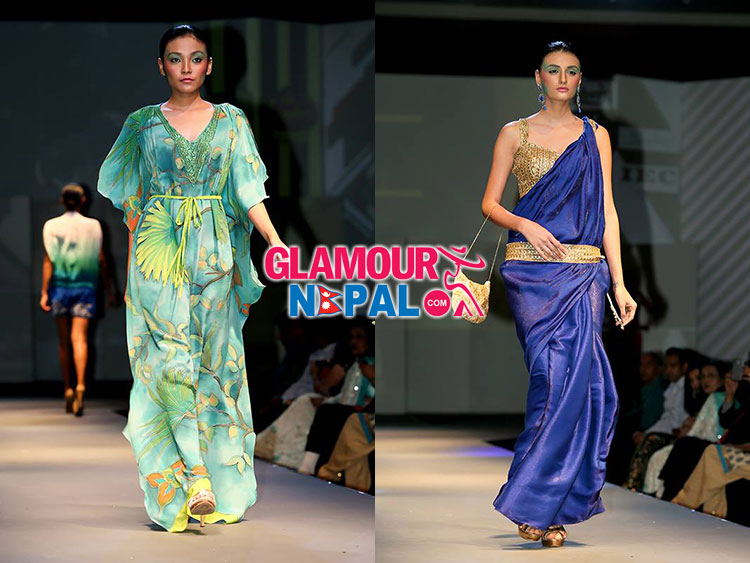 Then onwards, the ramp came lively with the creations of designer Prerana Agrawal with Reflections being the title of her collection. The creations were been found inspired by nature, birds and flowers explored fabrics like georgette and velvet with colors like pink, yellow, blue and purple being the major ones while most of the sarees presented in this collection were of peach color. The party wear range featured the attires having pleated sarees being the major one.

The only corporate female wear range of the first day of Nepal fashion week came into the view in the seventh sequence. The natural fabrics like cotton, allo, Dhaka, bamboo and silk were been found used bringing the out the collection featuring dresses like jacket, dress, skirt and tops having the use of nettle and unique Dhaka patterns. Designer Mukta Shrestha for SABAH Nepal came up by this unique collection with traditional breathing in modern life. The collection came to the end with former Miss Nepal 2010 Sadikchhya Shrestha being the show stopper.

well with appealing performances by twenty beautiful female models 18 being nepali and two being Indian, the first day of TGIF Nepal Fashion Week 2014 came to the end some around quarter to nine in the evening which started one hour early before this stoppage time. Now three more days to go on, so stay updated with us.
Text by Rojin Shakya | Images Courtesy: Mahesh Pradhan
Click on Small Images to View Large Inage ! 🙂