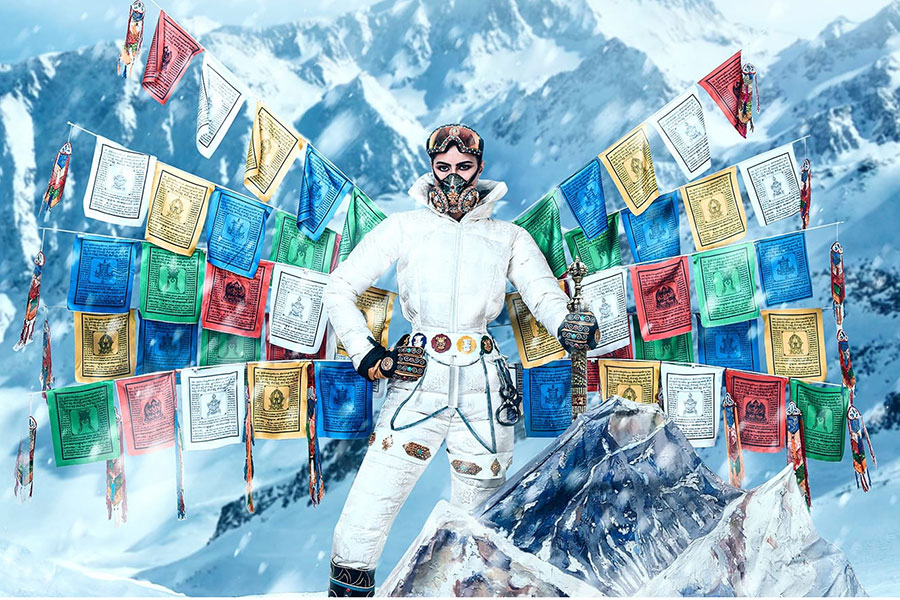 Regarding the same, Miss Universe Nepal 2020, Anshika Sharma who is currently competinMiss Universe Nepalg at the 69th edition of Miss Universe being held in Florida, United States, has revealed her national costume of the competition. The costume was been specially premiered on Kantipur TV HD through a special program. The costume is named Ode to Mountaineers and by the name, the costume is dedicated to the mountaineers especially the Sherpas, their success of reaching the summit, their journey, their bravery as a whole one of the pride of Nepal, the adventure of mountaineering.

The theme of the costume is by Anshika herself and is been conceptualized and designed by fashion designer Bina Ghale. The national costume, ode to mountaineers have various detailing and amazing craftsmanship. The costume consists of a special mountaineering suit developed by Everest Outfit led by Tenzeeng Sherpa. The suit is been adorned with various jewelry representing Nepalese culture and craftsmanship and hiking gears. The jewelry was been made by Rajesh Shakya. The paintings in the outfit were been done by Gautam Shrestha and Abhijeet Prajapati. The props were supported by Nepal Innovation Center led by Mahabir Pun and the team of Ritesh Dev and Krishna Deo.

The costume had attractive elements like Tibetan prayer flags, headgear, oxygen mask, and others. The majestic Mount Everest is been presented with its 3D version painted artistically on a canvas. The costume as a whole depicts the story of success to conquer the top of the world, Mount Everest.