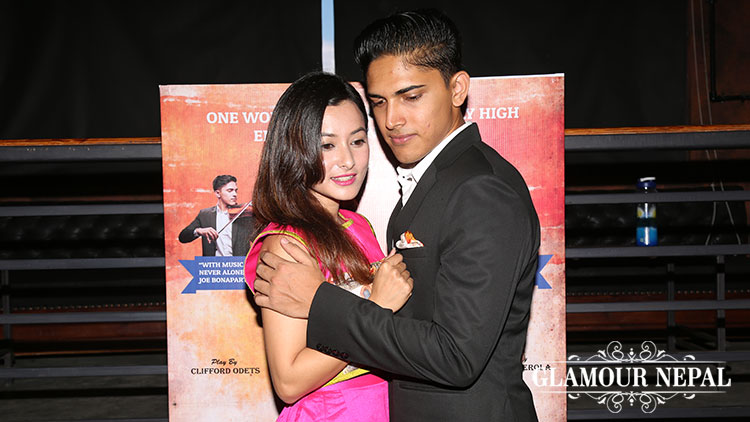 One World Theatre, in partnership with Highly High Entertainment, announces their current theatre production, Golden Boy by Clifford Odets. This famous American drama explores the conflict between art and fame, following the story of Joe Bonaparte, a talented young violinist turned brutal boxer, with his tough yet ethereal girlfriend Lorna Moon. The story takes place in New York City in 1937, split between the aggressive, hostile man’s world of boxing, and a gentler world that still remembers family, music, and tender love. 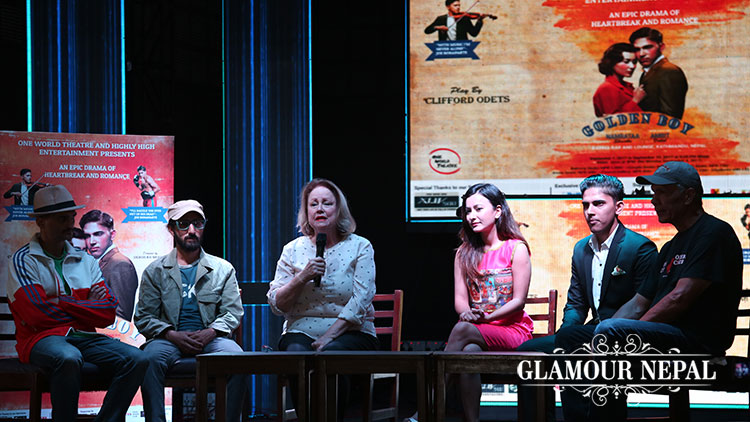 Adding to the production are several of Kathmandu’s top boxers who bring live, true boxing to the production. These star athletes and other boxers of Kathmandu also have the special opportunity to receive lessons and workshops from World Boxing Hall of Fame fighter Yaqui Lopez, of the Fat City boxing club in Stockton, California. Mr. Lopez joins One World Theatre and Highly High Entertainment as a boxing specialist for a unique collaboration.

Namrataa Shrestha as Lorna Moon Ms. Shrestha is one of Nepal’s preeminent film actresses and models, known for her roles in Nepali films such as November Rain and Mero Euta Saathi Chha. Shrestha returns to the stage and to One World Theatre to star in and co-produce this production with her company Highly High Entertainment. Her previous roles with One World Theatre include the title characters in both Oleanna, by David Mamet, and Yerma, by Federico Garcia Lorca, translated into Nepali by Shristi Bhattarai.

Alejandro E. Merola as Tom Moody Mr. Merola is a producer, actor, and composer from New York City who joins One World Theatre for a second time, following his performance in Kiss of the Spider Woman, by Manuel Puig, in 2010. Merola is a co-founder of Magic Transistor, a music and curation start-up seeded by Sean Parker, and works with Michel Gondry’s production company Partizan, and BB Gun Films.

Raj kumar Pudasaini as Mr. Bonaparte Mr. Pudasaini is a senior actor and Co-Artistic Director of One World Theatre, and hails from the original Gurukul Theatre Company. His recent notable stage roles include Krishna of Arjuna’s Dilemma, Mr. Frank of The Diary of Anne Frank, and Polomo in Anna in the Tropics, by Nilo Cruz. He recently directed PanikoGunjan and co-directed The Laramie Project: Ten Years Later.

Saroj Aryal as Tokio Mr. Aryal is a professional Nepali Theatre Actor and Director. He did his acting training with SankritikSansthan, and has worked with Rana Theatre and Naga Theatre Hotel Vajra, and as Artistic Director of Aakhyan Theatre Group. He the founder of Nepal’s first children’s theatre group, Pumpkin Theatre. This is his debut One World Theatre production.

Introducing Amrit Dahal as Joe Bonaparte Mr. Dahal has worked closely with One World Theatre for several years, with stage roles in The Laramie Project, Arjuna’s Dilemma, and The Diary of Anne Frank. He is debuting now as Joe Bonaparte, the Golden Boy of Odets’ classic play.

One World Theatre is a non-profit English language theatre company in Kathmandu, Nepal, dedicated to presenting intercultural, social justice productions, especially plays from South Asia, the Western canon, and contemporary American plays that are affordable, professional, experimental, and relevant. Recent productions include Arjuna’s Dilemma (Douglas C. Cuomo), Nepal’s first opera featuring a fusion of Western and Eastern music; The Laramie Project: Ten Years Later (Moises Kaufman and the Tectonic Theatre Company), a true story about gay rights and hate crimes in the US, featuring stories from Nepali LGBTIQ people; Paniko Gunjan (Rajkumar Pudasaini), an educational outreach Nepali play about water sanitation in Patan, based on research from the Patan Academy of Health Sciences, with the support of Oxford University Clinical Research Centre; and The Diary of Anne Frank (Albert Hackett and Frances Goodrich) about a Jewish family living in hiding during the Holocaust, based on the true diary writings of the young girl who lived it firsthand.