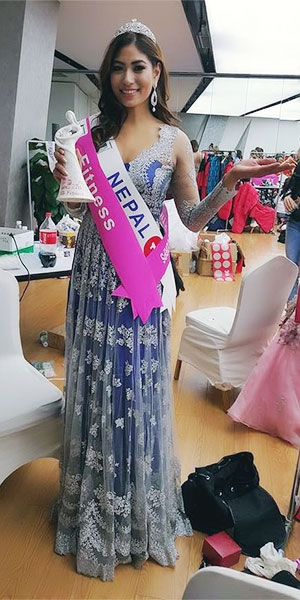 Rojin Shakya, Kathmandu: 24 years of Nagma Shrestha is been successful to be crowned as third runner-ups at World Miss University 2016 been held on 27th of January 2016 in Beijing, China. Nagma also grabbed Miss Fitness awards in the event. The 27th edition of World Miss University event saw 70 global beauties competing for the major title awards and was showcased at Beijing National Stadium also known as the Bird’s Nest. The 27th edition winning crown went to Kelin Rivera Kroll from Peru. Anzhelika Rublevska from Pakistan and He Xuan from China were respectively successful at first and second runner-ups awards.

Miss Nepal Earth 2012 and Television programme producer and presenter at Image Channel, Nagma Shrestha has successfully represented Nepal at Miss Earth 2012 where she ended as the top 8 finalists. She is also the goodwill ambassador of Child Reach Nepal and Ujayalo Foundation and is actively involved in social works. Nagma was also the winner of Miss Colleges 2009. Earlier Ayusha Shrestha, Usha Rajak, Ayusha Karki and Priyanka Pokharel has represented Nepal at World Miss University where Ayusha Shrestha was successful to wear the crown of World Miss University 2003 which was first ever major international beauty pageant award for Nepal.