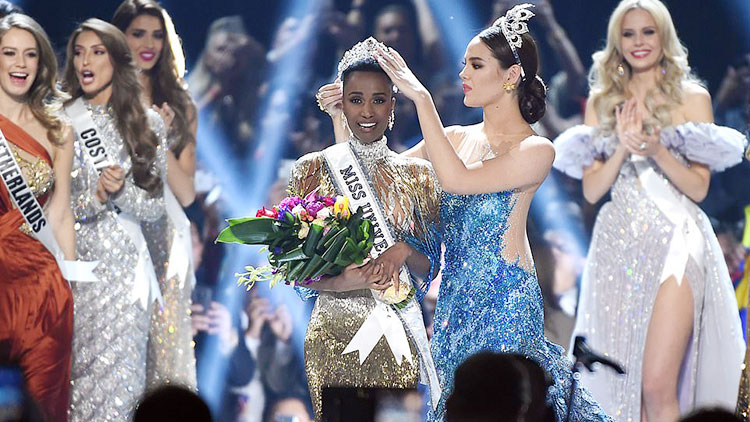 The confidence, charm, beauty and glamour of ninety beautiful delegates from different corners of the globe was been spotted on the grand stage set up of grand coronation of 68th edition of Miss Universe pageant. Hosted at Tyler Perry Studios in Atlanta, Georgia, the United States on 8th of December, Catriona Gray Miss Universe 2018 from Philippines, found her successor as Zozibini Tunzi from South Africa.

26 years of age Zozibini is been second black woman to earn the crown of Miss Universe since Leila Lopes from Angola being crowned as Miss Universe 2011. This is the third occasion for South African beauty to clinch victory at Miss Universe title. Earlier in 1978 it was Margaret Gardiner and in 2017 it was Demi Leigh Nel Peters who bagged Miss Universe award.

After the rounds in swim suit, evening gowns, top 20, top ten, the final five faced question answer sessions on political issues such as climate change, privacy and reproductive health. For the final single question that was been asked, what is the most important thing we should teach young girls today?

Zozibini Tunzi from South Africa answered,
I think the most important thing we should be teaching young girls today is leadership. It’s something that has been lacking in young girls and women for a very long time, not because we don’t want to but because of what society has labeled women to be. I think we are the most powerful beings in the world and that we should be given every opportunity and that is what we should be teaching these young girls, to take up space, nothing is as important as taking up space in society and cementing yourself, thank you.

This answer made Zozibini to be the new queen for Miss Universe pageant. Her court included Madison Anderson from Puerto Rico as first runner-up while Sofia Aragon from Mexico stood as second runner-up. Other than these ladies Gabriela Tafur from Colombia and Paweensuda Drouin from Thailand were on top five finalists. Among the ninety competitors in Miss Universe 2019, from Nepal Pradeepta Adhikari was in the competition but her journey in the event could not became remarkable.

The newly crowned Miss Universe 2019 Zozibini was born on 18th September 1993 in Tsolo, a town in the Eastern Cape of South Africa, to a family of educators, her mother is a school principal and her father works at the Department of Higher Education and Training in Pretoria. She is the second of three girls. A Public Relations officer, Tunzi is a graduate of the Cape Peninsula University of Technology in Cape Town. She did participate in the Miss South Africa pageant in 2017 and made it to the semi- finals. Later this year she gave second try for the competition and earned Miss South Africa 2019.