By Rojin Shakya | The most awaited gala event of the year, The Hidden Treasure Miss Nepal 2017 is heading to its grand finale being scheduled on Friday 2nd June 2017 at Hotel De la Annapurana, Durbarmarg. As the clock would strike 7.30 pm the final chase for the most prestigious crown of Miss Nepal 2017 would begin. 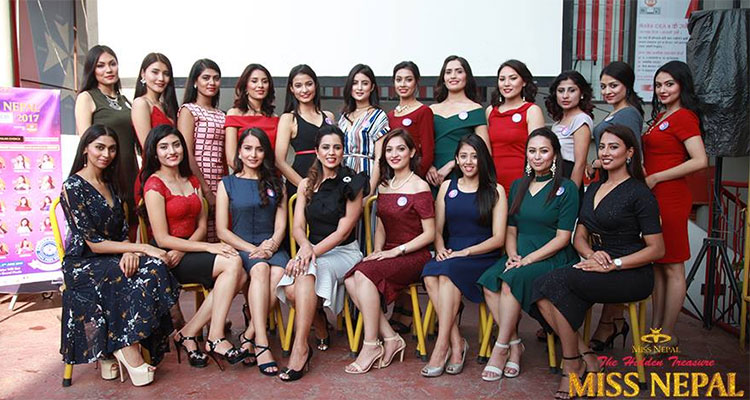 The 19 beautiful ladies representing different corners of country would appear on stage and perform as been choreographed by Rachana Gurung Sharma. During the various rounds of the competition the girls would be wearing Akarshan boutique and Women’s Planet.

With few days being remaining for the finale, the final polishing and framing is being done to bring the perfection in the girls to make each of them shine as stars. As the final competition is nearing other than the grooming, the girls have faced and performed for several other sub categories of the event. The categories like Best complexion, Best Hair, Miss Confident, Miss Intellectual, Miss Photogenic is been judged by different personalities in respective category. Among them Berger Miss Talent was been showcased at Russian Culture Center, Kamalpokhari.

As Miss Nepal 2017 competition also has an award called Yamaha Face of Fascino. This award is for the one who earns the maximum face book likes related to the competition. To make your favorite contestant to win the award of Yamaha Face of Fascino, you need to like and share the post related to contestant that could be found in the page of Yamaha Nepal.1 lucky randomly selected voter will also get award and it would be brand new Samsung S8. The last date of voting in this category is 2nd June 2017, till 3 pm.

This year’s event has ‘n-mag Miss Popular Choice Award’ to be decided by SMS voting. The winner of this subtitle securing highest sms votes would be benefited with a direct placement in the top ten semi-finalists of the event. As per that SMS voting is being opened for ‘n-mag Miss Popular Choice 2017’ and would open till 8 pm on June 2nd 2017, the grand finale day. So, people vote for your favorite contestant. To vote Type MNcontestant number and send it to 33001.

With all the best wishes to all our lovely contestants of The Hidden Treasure Miss Nepal 2017, we eagerly wait for 2nd June 2017. We will be back with the final results. Keep visiting Glamour Nepal.