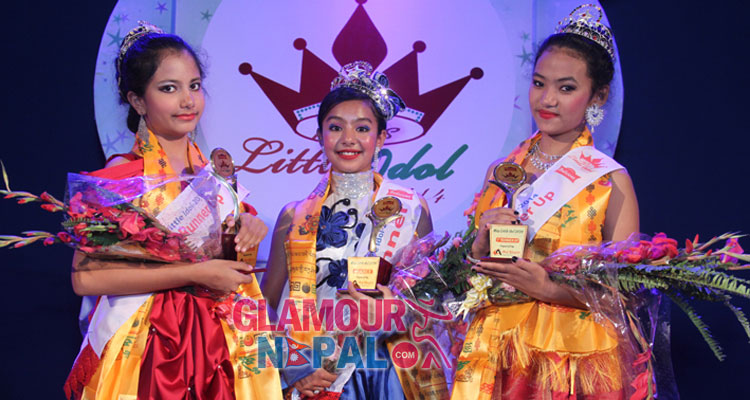 Glamour Nepal | The 2nd August 2014 made fifty one school going girls busy and competitive for the title of Miss Little Idol 2014, the sixth season of the event been organized by Action entertainment Pvt Ltd. By the end of the event with the intelligence and ability to win the judges votes Pratishna K.C. got elected as Miss Little Idol 2014 and received cash prize worth rupees twenty thousand. Sneha Jarga Magar became the first runnerups whereas second runnerups position was secured by Sneha Adhikari.

The event took off when the contestants made their way on the stage set in the Nepal Academy Hall, Kamaladi , dressed in the outfits designed by the student designers of IEC College of arts and fashion and gave their self introduction, the best they can to impress the judges. Second round of the competition gave the contestents dressed in cultural and traditional attires of different ethnic groups of Nepal. Then came the elimination phase where fifteen out of fifty one contestants were been picked up. The selected top 15 contestants showcased their intelligence by answering the questions as been asked to them by the judges. Finally top seven finalists were been picked up and then after answering to the final question, the event found the winner as Miss Little Idol 2014. The event was been choreographed by choreographer Rojin Shakya