The Hidden Treasure Miss Nepal 2016 is now few days remained. 19 beautiful participants are going through several phases of grooming and activation activities which obviously are making the girls exhausted by the end of day. But the good note is that they are being polished and getting ready to shine and to be seen. 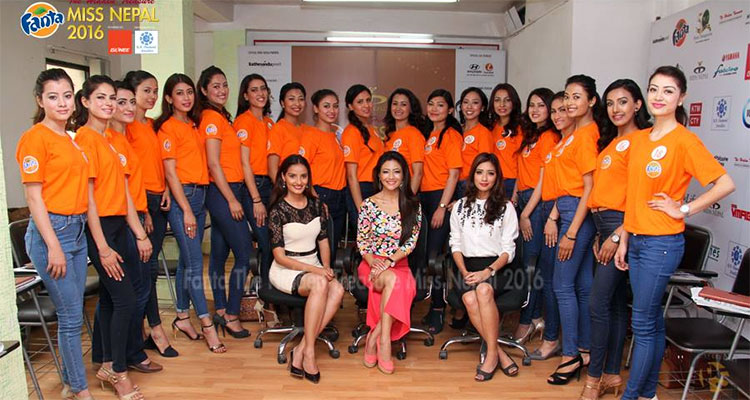 Rojin Shakya | The grand coronation of Fanta The Hidden Treasure Miss Nepal 2016 is now few days remained. 19 beautiful participants are going through several phases of grooming and activation activities which obviously are making the girls exhausted by the end of day. But the good note is that they are being polished and getting ready to shine and to be seen.

This year more of outdoor activities are been added to make contestants put more of their effort and also to make each contestant competitive not only for the national but also for the international event. As per this the sports event is been introduced for the first time in the history of Miss Nepal pageant so far.

The contestants did participate in AAN’s Pre Crity Award Programme that was helpful to enhance their presentation skills. The visit to Pashupati Bridha Ashram, the old age home has been one of the regular events that was also continued this year. To make the contestants socially responsible the participation at Bagmati Cleaning Campaign was also found fruitful.
The contestants got more knowledge on Dining Etiquettes at Hotel Annapurna where they practiced on fine cocktail dining manners. The contestants got to learn more on Women Empowerment by women activist Sapana Pradhan Malla while they did learned more on pageantry through reigning Miss Nepal Evana Manandhar.

Besides the regular training session the contestants of Miss Nepal 2015 had a four day from March 18 to 21 trips to Chitwan where they attended workshop conducted National Trust for Nature Conservation, NTNC. The workshop was hosted at Biodiversity Conservation Center, Sauraha, Chitwan.
The workshop was focused on imparting knowledge on various issues, challenges and efforts on biodiversity conservation, protected area management system, wildlife conservation and related issues. The contestants did explored Chitwan National Park through elephant and jeep safari. The contestants also visited Coca Factory located at Bharatpur.

The contestants of Miss Nepal 2016 are also going through the sub competitions of Fanta Miss Bubbly Public Choice and Yamaha Face of Fascino, The Youth Icon of fashion and style. For Fanta Miss Bubbly Public Choice category, the contestants did performed the bubbliest way they can and brought out the crazy side of their personality which was been televised and was aired on both Kantipur TV and Nepal Television.

The viewers need to vote for the bubbliest contestant through SMS voting and the contestant receiving the maximum votes would qualify as the wild card entrant for the top ten semifinal rounds. To vote your favorite contestant you need to Type MN (space) contestant number and send to 3626

Besides the grooming and other activities the contestants have also faced the sub competitions for various subtitles included in this year’s edition of Miss Nepal pageant. Among them Miss Nepal 2016 Gionee Miss Personality, Safety Miss Confident, Miss Acne Beautiful Skin, The Kathmandu Post Miss Intellectual, Alfa Beta Miss Scholar are been judged.