After the huge success of Hate Story and Hate Story 2, the makers of Hate Story franchise have come with yet another part ‘Hate Story 3’. The most awaited trailer of this suspense thriller movie has been released with a grand event in Mumbai and raised a lot of appreciation.

Zarine Khan lights the screen up with her presence after a long break, while Sharman Joshi in an absolutely new role. The trailer is packed with love-making scenes. Sharman and Karan are seen chiseled and robust. Watch Here the Trailer of Hate Story 3 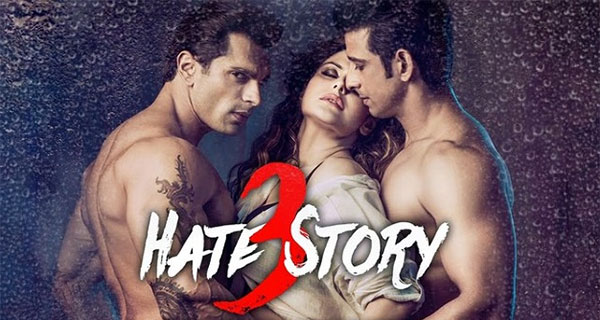 The film is directed by Vishal Pandya who had been the man behind the second part of the franchise. He has ensured that the audience is treated with much more excitement this time around and Hate Story 3 has all that you have missed out on in the second part! Vikram Bhatt and Madhuri Banerji have written the screenplay while Prakash Kutty has done the cinematography. Amaal Mallik, Jeet Ganguly, Ankit Tiwari and Arko Pravo Mukherjee have composed music for this sexy drama. Produced by T-Series, the film is set to hit the silver screen on 4th December 2015.