Evana Manandhar selected as one of the top 7 contestants to perform in the Dances of the World segment. The segment doesn’t award a prize, but is regarded as an honor to be chosen in this segment to show the contestant’s culture and tradition displayed through dance and music. 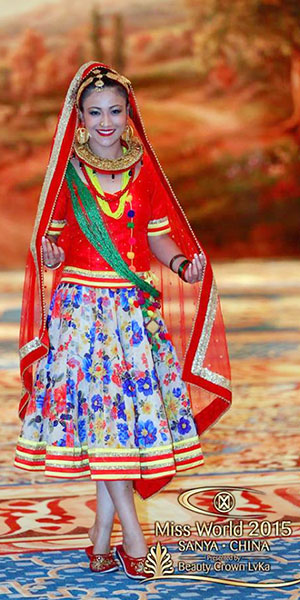 The 65th edition of Miss World pageant is right on its way of making. Hundred and fourteen global beauties from various corners of the world are at Sanya, China contesting for the crown of Miss World 2015. Various activities related to the contest are going on and things are getting more competitive for each of the contestant. In that regard one of the most anticipated segment of Miss World, Dances of the World has finalized its top 7 contestants to perform at the grand finale stage live for worldwide TV audiences on December 19th 2015.

In this context reigning Miss Nepal 2015, Evana Manandhar is been selected as one of the top 7 contestants to perform in the Dances of the World segment. Along with Evana delegates from China PR, France, Paraguay, Samoa, Slovakia and Zambia are been finalized for Dances of the World segment at Miss World 2015. Though the segment doesn’t award a prize, but is regarded as an honor to be chosen in this segment to show the contestant’s culture and tradition displayed through dance and music. Evana had prepared a fusion version of Newari and Nepali Jhyaure Dance that reflect Nepalese culture.

Dances of the World segment was been introduced in the year 2009 at Miss World and so far from Nepal former Miss Nepal Malina Joshi and Ishani Shrestha has performed in this segment respectively in the finale of Miss World 2011 and Miss World 2013.

Various voting categories are going on for the contestants to prove oneself more competent for the most coveted title of Miss World. Regarding this in the Web Popularity contest so far Evana Manandhar is ranked at sixth position.

To cast vote in this competition to Evana, Click Here

The website is in Chinese but once the site opens there is selection of language on the top right corner, select English then go for voting. On the other hand Evana is placed at positioned at number 12 so far in the Multimedia award category. In order to held Miss Nepal 2015 Evana to win Multimedia Award you first need to download Alipay App on Your iOS & Android phones.

The contestants have been encouraged to film interesting, exciting and engaging content to showcase their experience at Miss World 2015. Users are then encouraged to donate a small amount of money when they see a video that they particularly enjoy.

Another award called Miss World People choice award is also opened for the competition. This is one of the major subtitles in the event where people can vote for their choice. The winner in the category will give an opportunity for the contestant to get entry in the round where she will face the judges for the question answer session which will be decisive to finalize the finalists of Miss World 2014. For this Miss World App will play a vital role.

The Miss World App is available on iOS & Android, and can be downloaded from The Apple Store and Google Play. To down load the Download the Miss World Application, Click Here.

For casting your vote and voting details, Click Here.

Winner of this voting will get a wild card entry to join the stage with top 10 contestants!
The finale of Miss World 2015 is slated to be held at the Crown of Beauty Theatre in Sanya, China on 19th of December 2015 and will be hosted by the Filipino-American actress Megan Young, the winner of the 2013 edition of the pageant.