Evana Manandhar heads to China for Miss World 2015; the winner of awards Miss Gosh Girl, Miss Intellectual and Miss Personality in Miss Nepal 2015 has focused on the concept of rebuilding and reviving the nation after the traumatic earthquake working through the next generation, children and women together. 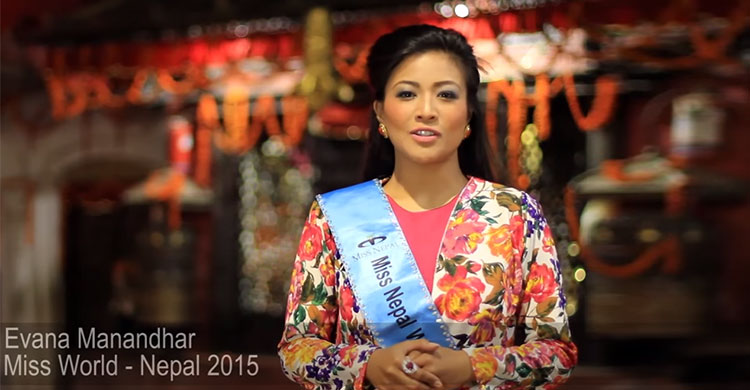 The winner of the Hidden Treasure Miss Nepal 2015, crowned as Miss Nepal World 2015, twenty four years of age beauty queen Evana Manandhar has headed to China on Saturday on 21st of November for her participation at 65th edition of Miss World pageant. Evana was also the winner of awards Miss Gosh Girl, Miss Intellectual and Miss Personality in Miss Nepal 2015.

Evana hails from Kathmandu and holds Bachelor’s degree in Marketing & Entrepreneurship from USA. Multilingual Evana speaks four languages and is always forefront at learning new ideas. She enjoys networking, communicating, dancing and swimming. She enjoys playing sports, travelling and seeking adventure. Evana is a recipient of Dean’s Excellence Award (Marketing) and the International Student of the Year Award in the US. 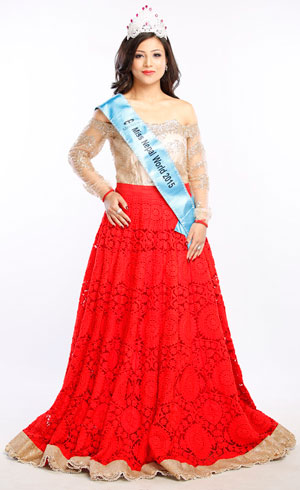 Among the various awards at Miss World Pageant, ‘Beauty with the Purpose’ is one of the major one. To compete in this segment at the Miss World Pageant Evana Manandhar has focused on the concept of rebuilding and reviving the nation after the traumatic earthquake working through the next generation, children and women together. For this purpose she spent a week in Upper Mustang and Jomsom areas working closely in the areas of counseling, motivation, capacity and livelihood building and relief work with the children and women community at large. She has completed the project working closely with National Trust for Nature Conservation of which she is the Biodiversity Conservation Ambassador.

Evana’s overall presentation would be focused at conveying the message very clearly that Nepal is still safe for the tourism even after earthquake.
Evana would be performing in the fusion version of Newari and Nepali Jhyaure Dance while she would be flaunting dresses that would reflect Nepalese culture. The dresses are been made by Oodhani Boutique and Designers Misu Shrestha and Tenzin Tseten Bhutia.

The grand coronation of Miss World 2015 will be held on 19 December 2015 at the Crown of Beauty Theatre in Sanya, China PR. Miss World 2014 Rolene Strauss of South Africa will crown her successor at the end of the event. 120 contestants including Evana from Nepal are in the race for the crown of Miss World 2015.