Six long weeks of grooming session comes to the happy ending with the selection new Miss Nepal 2016. 19 beautiful ladies who were been groomed and trained in various aspects by different experts finally competed in the grand coronation evening 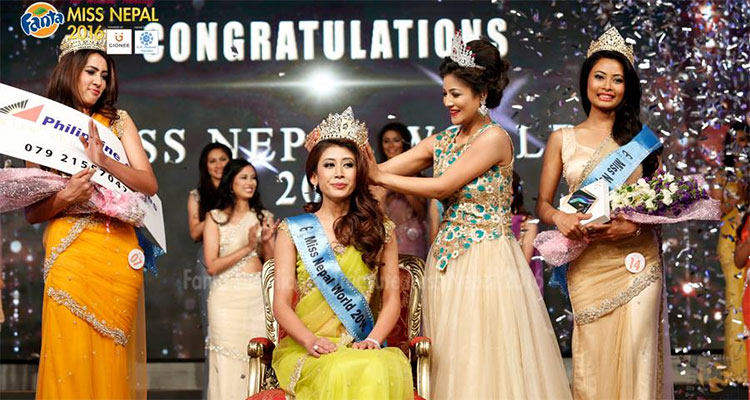 19 beautiful ladies who were been groomed and trained in various aspects by different experts finally competed in the grand coronation evening of Fanta The Hidden Treasure Miss Nepal 2016. 8th April 2016, 26th Chaitra 2072 at Hotel De la’ Annapurna, Durbarmarg the final announcement of the event declared Ashmi Shrestha as the most deserving contestant of this year’s Miss Nepal competition and so was victorious to put on the beautiful tiara of Miss Nepal 2016 as designed and crafted by R.B. Diamond Jewelers.

In the event Roshani Khatri was successful to put on the crowned of Miss Nepal Earth 2016 while Barsha Lekhi was crowned as Miss Nepal International 2016. Roshani was also successful at the awards of Miss Confident and Miss Personality. The event choreographed by Rachana Gurung Sharma had rounds of introduction, evening gown competition, oral question answer session for top ten semi finalists and final written question answer session for to five finalists. The event was been hosted by Sanjay Gupta and Supriya Tuladhar.

Miss Nepal World 2016 Asmee Shrestha, a pretty faced young lady from Kathmandu, Baneshwor is 22 years of age and stands 5 feet 7 inches tall. A BBA student Asmee is not a new name in the glam field. A well known name in the modeling scene of Nepal since six years from now, Asmee was earlier been the winner of Face of Classic Diamond Jewelers 2014, also walked for popular shows like TGIF Nepal Fashion week, Trendsetters and many others. Been captured for magazine covers and music videos, Asmee aspires to be a business entrepreneur and takes a keen interest in listening music.