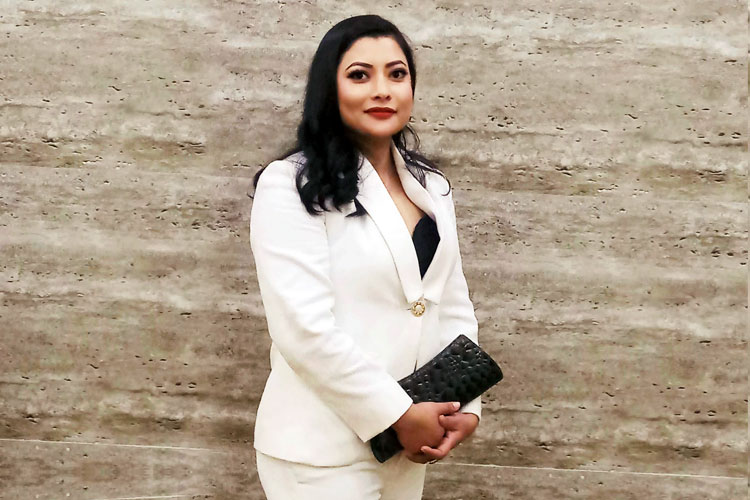 The Friday of 5th February would witness a live conversation with Fashion Designer Anchu Pandey, at ‘Speak to me’ a Facebook live talk show by Fashion Choreographer Rojin Shakya.

Anchu Pandey, currently working as a Designer Head at Sonam Gear. She is the founder/Managing Director at Stitchland and Founder at gfna, the kidswear. She has also started her own designer label under the name Anchu, with no boundaries to wear. After completion of graduation in fashion designing from IEC College of Art & Fashion, Anchu started her own design house called Stitchland in 2014.

The immense talent fashion designer Anchu has showcased her creativity through the number of fashion runway shows that include highly acclaimed shows like TGIF Nepal Fashion Week, IEC Designer’s Runway, Voyage of Creation, Fashion Secrets, etc. At the very beginning of her fashion designing career, the lady bagged first runner-up position at the fashion designers competition called Voyage of Creation hosted at Hotel Yak and Yeti on 22nd February 2014.

Her creations mostly explored on rich textiles, beautiful texturing, classic cut, wonderful color combination, high-end designs have been wooed not only Fashionistas of Kathmandu valley but also other major cities of Nepal. The lady’s creativity has also kissed the international runway through the show called Thailand International Fashion Fest, TIFF held in Bangkok, Thailand. Other than creating designs and dresses for males and females, the lady has successfully presented the exclusive pieces for the kids as well.

Anchu has successfully designed for some of the famous Bollywood celebs like Rahul Roy, Sadhana Singh, Urvashi Rautela, Kollywood celebs like Basha Siwakoti, Malina Joshi, and others. Besides Models and Celebs, Anchu’s creations are also been flaunted by delegates from Nepal at various international pageants as well. Some of the Notable ones are national costume for Prajwal Shrestha for Mister Universe Tourism 2019, national costume for Prashant Jung Shah for Mister International 2018/2019, national costume for Dhruv Budhathoki for Manhunt International 2018. From fashion shows to pageants, Anchu has also been costume designer for various commercials as well. Other than being a designer, Anchu has also done a commercial for METLIFE Nepal.

The 66th edition of Speak to me would go live on 5th February Friday at 6 pm on the Facebook page of Rojin Shakya and would be covered by glamournepal.com. Glamournepal.com is the promotional partner for the talk show.